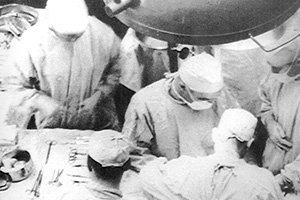 On December 23, 1954, Richard Herrick became the first person to receive a successful kidney transplant. The 23 year old had been suffering from chronic nephritis, an inflammation of the kidneys that causes permanent damage to the organs. The young patient’s condition had become so severe that it was apparent that his chances of survival relied on receiving a healthy, functional kidney. This healthy kidney was donated by Herrick’s twin brother, Ronald, who was a good match to be Richard’s donor.
Doctors at the Peter Bent Brigham Hospital in Boston, MA had been researching how to perform a successful kidney transplant for several years before performing the life-saving operation on Herrick. Three days before operating on their patient, they first practiced the surgery on a whole body donor so that they were better prepared to perform the surgery on their living patient. The practice surgery was successful, so they scheduled Herrick’s surgery 3 days later.
The kidney transplant between the twins was performed by Dr. Joseph Murray, who became an international leader in the field of organ transplantation. His work was instrumental in the development of immunosuppressive drugs to reduce the risk of a donated organ being rejected by the recipient’s body. In 1990, Dr. Murray won the Nobel Prize in Medicine for his ground-breaking work in organ transplantation.
Kidney transplantation has become a common treatment for people with end-stage renal disease, a condition often brought on by other illnesses, such as diabetes, hypertension, and certain infections. As of 2013, approximately 17,600 in the United States had received a life-saving kidney transplant.
Share

FAQ- Can I request which research study I would like my donation to benefit?