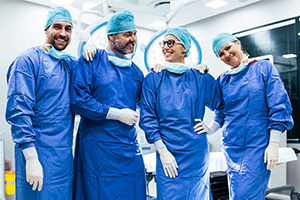 MedCure donors inspire us everyday with their generosity and their dedication to the advancement of medical research and education. The quest to find new treatments and cures, or simply to deepen our understanding of the diseases and conditions that affect us and the people around us, never ends. There is always more to learn and always a new breakthrough on the horizon. Now that 2019 has come to a close, we can take a look back at the past year to see how medicine has moved forward thanks to the continuing efforts of the medical research community.

The best patient outcomes result from the use of medical devices that match a patient’s natural anatomy. While in the past devices were mass produced or manufactured according to specifications developed according to average patient specifications, advances in 3D printing technology are now allowing doctors to provide patients with devices modeled on their own bodies. These customized solutions have show to achieve better acceptance when implanted, which lowers the risk of complications, as well as to offer great comfort and performance. Right now, the widest use of this tech is in orthopedic and cranial implants, prosthetics, and stents used to combat the narrowing of airways caused by certain disease processes, but new developments are moving fast with other implants on their way to the commercial market as we speak.

Cancer remains a serious threat to human health, but researchers continue to advance our understanding of the disease and to develop new ways to fight it. The past year specifically saw some exciting developments in our ability to detect cancer earlier, thus increasing the odds of successful treatments and cures. A group in Great Britain showed that a blood test could detect certain antibodies produced in response to the proteins released by breast cancer cells up to five years before patients showed any clinical signs of the disease. Meanwhile, an American research group conducted a trial that demonstrated the ability of a different blood test to screen for more than 20 different types of cancer by looking for specific chemical units attached to the DNA of cancer cells. Not only was this test able to detect the presence of cancer in the patients, it was also able to successfully pick out where in the body the cancer had originated.

As our understanding of human genetics continues to develop, so do the potential uses of genetic therapies in the fight against disease. Gene editing technology like CRISPR could allow doctors to remove strands of DNA that are infected with viruses in order to cut off their ability to cause disease. Other potential uses of gene therapy include the deletion or addition of DNA in order to correct harmful mutations or fight genetic disease. Another gene therapy that has been put into clinical trials involves adding genes to the stem cells of patients with sickle cell anemia. The modified cells are then reintroduced to the patient’s body where they can produce new or undamaged versions of the genes needed to combat the disease.

The launch of new and improved smartphones every year might have numbed some of us to the evidence of how quickly technology is advancing, but the application of technology to medicine has certainly kept pace. In 2019, a prime example of this could be seen in the attention surrounding the use of smart tech in respiratory inhalers. The inhalers use a sensor that links the device to a smartphone app that can be used to track and analyze data on patient use and breathing patterns. A study from the Cleveland Clinic demonstrated a significant drop in the number of hospital visits made by users of the smart inhalers. Other exciting tech advancements of the past year include the ability to link ultrasound machines to smartphones, wireless brain sensors that assist in monitoring patients with neurological disorders, and continuing advances in robotic surgery that allow for greater surgical precision and improved outcomes for patients.

Right now, experts estimate that almost 6 million American suffer from Alzheimer’s and they project that number will more than double in the next 30 years. Luckily, a recent influx in research funding has already begun to show dividends in greater understanding of the condition and potential new ways to treatment it. A drug show to slow cognitive decline in some patients has been submitted for FDA approval, and the most exciting part about it is its ability to impact the disease process instead of just treating the symptoms. Continued investigation has also led to new area of exploration on the genetic components of the disease, with recently presenting findings pointing to 11 sex-specific genes linked to the condition. A separate study had identified another gene associated with increased risk for Alzheimer’s that may behave differently in minority populations. A greater understanding of these genetic factors could point researchers toward new avenues to explore in their quest to eradicate Alzheimer’s for future generations.