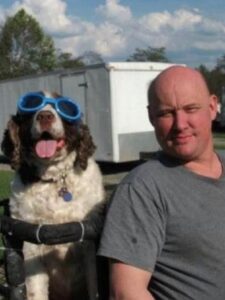 Ralph Woynarowski passed away after a long illness on October 20, 2020.  Ralph was born on July 13, 1962.  His loving wife Carol will miss him dearly. He was Ralph and Jane Woynarowski’s fifth child. He is predeceased by his parents and brothers, John and Michael, father-in-law Harold Zeller, and sister-in-law Kay O’Donnell. Surviving Ralph are his sisters, Patty Benz and Mary Dehnert, mother-in-law Sarah Zeller, brother-in-laws Mark Dehnert, Bob Benz, and Alan Zeller, sister-in-law Joni Hartman, nieces, Devin Boronkas, Tara Benz, Brenna Delp, and Sage Hartman, nephews, Kurt Dehnert and Hunter Hartman.Ralph was a software engineer for SAIP and Lockheed Martin. He had a BS in Computer Science from Albright and a Masters in Engineering from Penn State. Ralph fought his illness valiantly. He struggled to walk for many years as the disease progressed, but Ralph refused to let the disease stop him from working and remaining active. Most people would have given up many years ago, but not Ralph. He was a courageous fighter. Ralph loved his many pet dogs and he enjoyed cooking, scuba diving, camping, golfing, and riding his ATV.