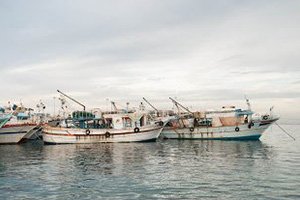 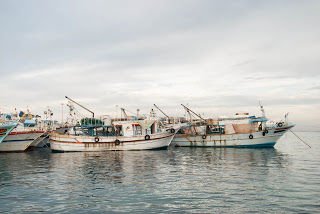 If you happened to find yourself on the mid-Oregon coast on Monday, May 27th, you might have witnessed something extraordinary. A small fleet of boats laden with colorful greenery sailed beneath the Highway 101 bridge and into the ocean, where they formed a solemn circle. Within sight of shore, they tossed wreathes and boughs and flowers into the sea before returning safely once more to harbor.
Why? What’s behind this unique and moving gesture held every Memorial Day in Depoe Bay, Oregon? As it turns out, the answer lies in a heroic act and a tradition that has continued each year since 1945.

So, sit right back and you’ll hear a tale…

On October 4, 1936 a storm rolled in over the coast of Oregon. The bad weather included rough seas and a dense fog that enveloped a small fishing troller called the Norwester. On board, captain Ernest McWilliams, his son Walter, and Walter’s friend Gene McLaughlin, all from Salem, soon found themselves floundering and unable to make their way home.

Despite having already put to shore, local fishermen Roy Bower and Jack Chambers made the decision to risk their own safety and took their troller, the Cara Lou, back out into the rough weather. By the time they located the Norwester, the fog had become nearly impenetrable, and their attempt to guide the lost ship back to port went disastrously wrong. The Cara Lou wrecked under heavy seas, while the Norwester was forced to tie up to a buoy to wait out the storm.

The next day, the fog and the seas cleared, allowing the McWilliams and McLaughlin to make their way safely back to port. Bowers and Chambers tragically did not survive. Bowers was found later that day tangled in the boat’s rigging, while Chamber’s body was located floating nearby. Locals commemorated the loss by casting flowers into the sea after the brave fishermen who died attempting to save the lives of others.

Since 1945, the annual Fleet of Flowers event has continued to recognize that courageous act. It has also expanded into a ceremony that honors all those who die or are lost at sea, as well as those whose remains are buried or scattered there.

All those who choose to donate with MedCure are cremated after they have completed their research participation. While donors often elect to have their ashes returned to their families, others opt to have MedCure perform a scattering at sea on their behalf. For many of them, that scattering takes place off Oregon’s Depoe Bay, right where the Fleet of Flowers sails every year in their act of remembrance. For those who choose this option, MedCure can provide a certificate detailing the coordinates of when and where the scattering took place in lieu of returning the ashes themselves.

At MedCure, we too pause at this time of year to remember all our generous donors who have chosen to help us advance the future of medical science. Whether or not the sea is their final place of rest, they all deserve our gratitude.

Hospice And The Holidays