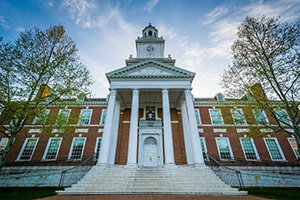 On August 4th, 1893, Johns Hopkins University School of Medicine opened in Baltimore, MD as the first medical research university in the United States. In its 124 years of existence, John Hopkins has earned the reputation of being one of the top medical schools in the country and has become a model for many research universities around the world.
The university was named after entrepreneur and philanthropist Johns Hopkins, who bequeathed $7 million upon his death to help found a hospital and medical university in Boston. The school was founded with the purpose of creating an advanced level of knowledge acquisition. In his inaugural speech, Daniel Coit Gilman, the first president of Johns Hopkins, described the university’s mission as follows: “To educate its students and cultivate their capacity for lifelong learning, to foster independent and original research, and to bring the benefits of discovery to the world.”
As a result of this mission, many of their alumni have gone on to make a huge impact on the world of medical science. Some of their most notable alumni include:
From Mr. Hopkins’ financial gift to the gift that whole body donors provide to the students and researchers at his namesake institution, Johns Hopkins University owes much to the generosity of its community. And, the community owes much in return for the medical advancements that have resulted from the university’s dedication to fostering research.
Share

FAQ: How Are Organ Donation and Body Donation Different?